This year, we’re excited to share a new way we’re fulfilling our vision. By empowering our employees to make an impact beyond their day-to-day roles and responsibilities, we think we can make even greater strides in mitigating the effect of adverse events worldwide. Our Safer World Sabbatical program — where Corvids get the opportunity to travel and volunteer for three weeks, complete with a stipend or donation to their charity of choice — ensures that interested employees can do their part in making a positive influence, inspire fellow employees and their communities, and gain greater insight into real-world issues.

Our first Corvid to leave the nest for a few weeks? Staff Software Engineer Aaron Votre. He’s worked at Corvus for the past five years (approximately 25 years in start-up time). For his Sabbatical, Aaron headed to Tanzania, a country in East Africa, to immerse himself in the culture, help construct necessary buildings for the community, and even try his hand as a part-time medic. Learn more in our latest Q&A.

How’d you decide where to go, and what to do, for your sabbatical?

I knew I wanted to go to Africa. I’d never been, I don’t have a lot of friends that have been, but considering how frequently it comes up on the news, and how often it’s referenced, I found it challenging to hear all of this and not experience what it’s actually like. The priorities for me were that I wanted to stay with a local family, go somewhere where I’d experience an entirely new culture (but still be able to communicate at least partially in English), and that I wouldn’t have to do anything with a computer. Tanzania had the most programs, probably because it is one of the more stable countries in the region.

Understanding Tanzanian culture was a driving factor for why I wanted to go. I didn’t necessarily want to do anything where I’d have to force interactions, like being a teacher, as I wanted as much opportunity to get to know people as organically as possible. Once I went, I helped build a school. The construction was really minor, so I ended up helping with medical outreach as well.

Can you set the scene for us and tell us more about Tanzania?

I was in Arusha, which is a big city of around 2 million people (but not the biggest in Tanzania). There’s one highway that goes through the middle of the city, and everything else is on either side of it. The neighborhood I was in (Sakina) started along the highway and spread out from there. Off of the highway, there were no paved roads. There were a lot of small one-story shops — most of them had electricity, but it was limited to something like a single cooler and a lightbulb.

The neighborhood had a mostly outdoors bar that we went to all the time, but not many people were actually drinking there. Culturally, people don’t drink as much and financially, it’s significantly more expensive than food.

Can you describe your volunteering experience?

The medical program stood out to me. We went with boxes of medicine an hour out of the city to a village with water, but no electricity or local doctors. We were there until we ran out of time and medicine. We raced through as many people as we could to get their information, give that to the doctor, and in turn, the doctor would give his best guess on how to handle it and move on.

After all the intake stuff was done, it took even longer to actually fill the prescriptions. Unlike in the U.S., you were physically cutting a pill pack to give them exactly what they needed. And when something ran out, nurses had to think of substitutions. Taking the doctor’s shorthand, you had to figure out how many pills or vials of liquid worked.

Is there a memory that stands out to you from your sabbatical?

My favorite memory isn’t anything super impactful or amazing, but it’s probably most true to my character. We found out about a field where people would play soccer at the end of the day. It was downtown, so we had to walk past the train tracks. Supposedly, there was a dirt field down by the train tracks, so me and another volunteer went to find it (soccer ball in hand).

I’m skeptical. We are walking blind into a different part of town, looking for a field. Eventually, we come across a bunch of kids playing on dirt with rocks on either end for the goals. And no one there speaks English, but we didn’t need to. We played until it was dark. My Swahili at the time was really bad. I had, maybe, three words that were useful? Regardless, we connected with everyone. It was definitely poor kids, in a poor neighborhood, but they welcomed us and we played until we had to go home because it was pitch black. It was the most authentic connection I felt. We didn’t need to try to force communication — we all just wanted to play soccer. 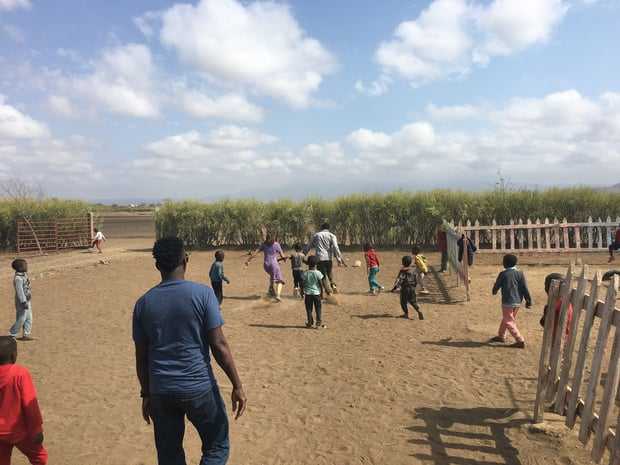 Did you have any reservations before going on, or even applying, for the Safer World sabbatical?

Before applying, I was worried about taking three weeks off from work. No one was ever going to tell me it was a good time and I was never going to feel like it was a good time. Before applying, and even after being accepted, I put off confirming a date because it felt like it’d never be the right time. I didn’t have any trepidation about the travel, but it was the longest I’ve been away from my girlfriend and my dogs and I was wondering what that would feel like.

What advice would you give to others who want to do volunteer programs?

The hardest step was starting. Ignore fears like “Can you make the time?” or “Do you deserve it?” You can always apply and say no later, but the first step is just thinking about something you’d like to do. But more specifically? I think everyone should go to Africa. I had a wonderful time with everyone I met in Tanzania. Everyone was welcoming. The homestay was absolutely the right call. I don’t think I would have spent nearly as much time in the community and meeting people that lived there if I had not done a homestay. I don’t think I would have that same experience in an AirBnB or hotel, living only with other volunteers. That would isolate me from getting to have dinner with my home family, playing with their kids, and meeting the neighbors.

There were clearly tourist parts of town and tourists bars and restaurants and there was none of that in our neighborhood, which was awesome. I never got pulled out of the experience. In a resort, you see the beauty — but you get a more Western experience. 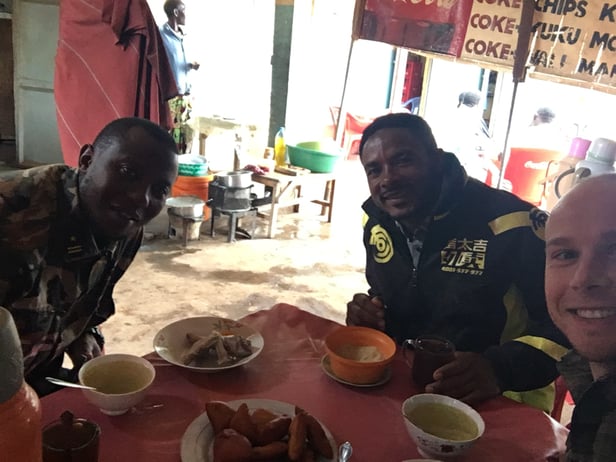 What have the highlights been of working at a high-growth organization?

I’ve been here 5 years, so there’s a lot! The easiest one is that the problems are always changing. You think: “Oh I don’t know if we can make a big difference on this now,” but then you gain twenty more employees, and you put six people on to find a solution. That makes a difference. That’s very energizing.

You can always take on new challenges. There are obstacles you couldn’t tackle before that you now can. With new people coming in, you have so many more opinions coming from people who’ve seen different things. As a company, you’re so much more capable, and we can see that change month to month.

What drew you to Corvus (and keeps you here?)

I was excited for what the ride would be like — and the ride has kept me here. I never get bored. I certainly never get to the end of my to-do list (in a good way). It’s fun to be in such a changing environment.